My name is Cindy Maudsley and I am the face behind Infertili.Tees 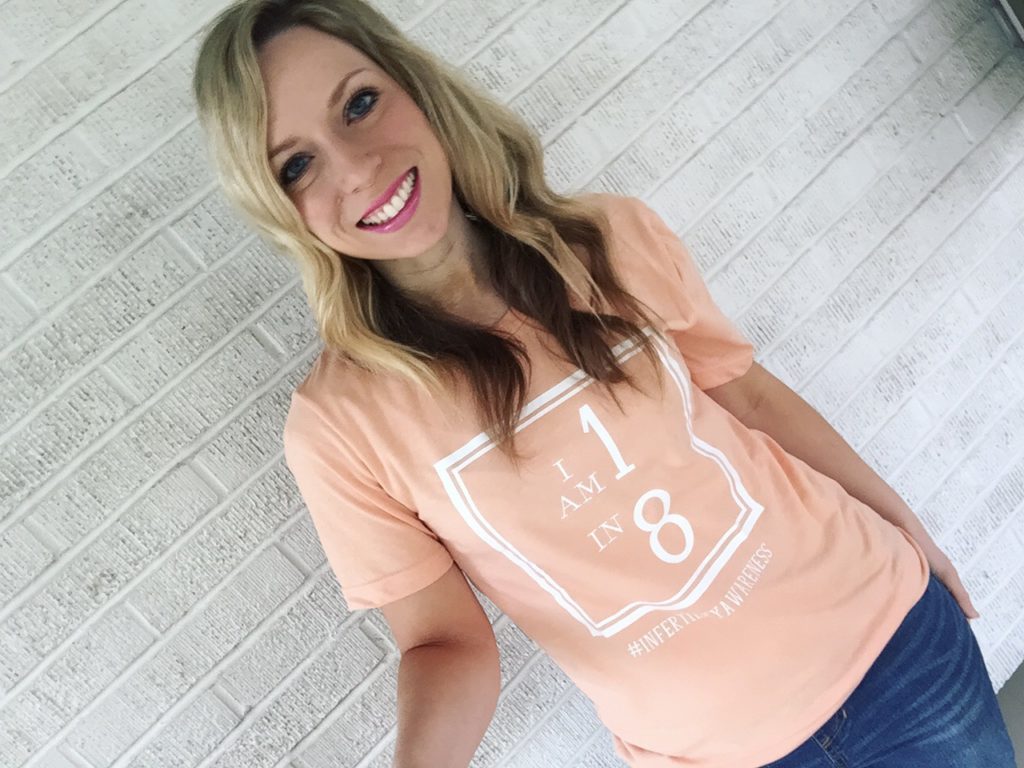 Infertility has a been a part of my life since 2007.

As a little girl I always wanted a big family. I have three sisters and two brothers- and having so many siblings was definitely a factor in wanting a lot of kids.

My husband and I met on a blind date, and were married almost one year later in April 2007. Together we compromised and decided we would love to have four children. How simple it seemed that would be!

After being married six months I convinced my husband that we needed to start “trying” for a baby. We told a few friends and family members and everyone was so excited for us. They were certain it would happen soon and we would be well on our way to creating the family we dreamed of. Even though I was really excited to begin this journey, I remember having a “feeling” that it might not be easy for us.

I had no real reason to feel this way. I always had regular cycles, and I had not been diagnosed with anything that would make it hard to conceive. I am a worrier by nature, but it was more than just being paranoid. But I pushed the feelings away and we began moving forward with trying to start our family.

After an agonizing six months of negative pregnancy tests, we felt strongly that we needed to look into getting some tests done. Those first six months were so very hard me. I watched countless friends and family members become pregnant and continually wondered when it would be “our turn.” I called my OBGYN, and she immediately agreed that we should start doing some tests to see if something was going on to prevent us from getting pregnant.  Most doctors begin testing only after you have been trying for a year- so we felt very blessed that my doctor was so proactive so early on.

For the next three or four months I went in for countless blood tests and ultrasounds. All of the results came back normal.

We then also had my husband go in for tests. It was then that we found out we had male factor infertility. Because of those results, our doctor suggested we go ahead with Artificial Insemination (IUI).

We were so excited to get to this step! That year we were consumed with all things fertility.

I used ovulation strips, tracked signs and symptoms, checked my body basal temperate every morning, obsessed over online message boards, and we even resorted to buying things like “Pre-Seed” to boost our chances. However, I did learn so much that year.

I felt very informed on fertility and everything that involved conception. I educated myself so I knew that we had done all we could do.

Exactly one year after we began trying, we went in for our first round of IUI in January 2009. We were incredibly blessed and ecstatic to find out a few weeks later that we were finally pregnant! Our baby girl was born in September of that year and we had never been happier.

When she was 18 months old, we returned to our doctor to try for a second child. Because we were so successful with IUI before, we had high hopes that it wouldn’t take long this time. And it didn’t. On our third round of IUI, we found out it had worked and we were expecting again!

At this point I felt that our infertility was under control.

I had accepted the fact that we would most likely always need to do these procedures to get pregnant. I was at peace with it. I learned that our story was just that. Ours. And that it didn’t help to compare ourselves to others.

Our second daughter was born five weeks early in December 2011, due to me having placenta previa. She came into this world at four pounds, but was healthy and strong and was able to avoid time in the NICU all together.  We were a family of four and we felt so happy.

When our second daughter was 18 months old, we again, headed to the doctor to try for a third baby.

That was in July 2013 and we are currently still waiting on our miracle.

Over the past five years we have done 15 rounds of IUI.

None of them successful.

In 2015 we were blessed to be able to do IVF. It was an emotional, yet amazing experience.

Two weeks after our egg transfer we were told I was pregnant but that our HCG level was really low. I went in for follow up blood work two days later to be told that the pregnancy was no longer viable and that my HCG levels were going down. They called it a Chemical Pregnancy.

Going through that heart break was what I consider one of the most devastating, and faith trying experiences of my life. There are no words to describe the way your heart breaks after failed IVF. Even though we felt so helpless and lost, we also felt a lot of comfort and peace and were surrounded by amazing family members and friends who rallied around us.

We felt that we needed to continue our journey. About five months later, we moved forward with doing another round of IVF using our two frozen embryos from our first round. I was at a good place emotionally, and had many experiences that confirmed to us that this was the right direction to take.

Going through IVF for a second time was just as hard physically and emotionally as it was the first time. But we felt hopeful that it would work. In October 2015 we had our egg transfer. Two weeks later, we were again told that I was pregnant. My HCG level was higher than last time, but still low enough that they wanted to check the levels again. Two days later, our world came crumbling down again, when we were told that we were yet again having a Chemical Pregnancy.

It was much harder the second time. That had been our last hope. I felt broken, lost, mad, and devastated. But with those feelings and emotions also came sacred and spiritual experiences, and fleeting moments of clarity and peace. Again, we were surrounded by so many people who held us up, comforted us, and showed us their love. If nothing else, going through the heartache we went through showed us how good people are. We were served by so many and our hearts were touched. We will never forget the outpouring of love we received and we feel so incredibly blessed to be able to have experienced it.

At this point we both had spiritual confirmations that we now needed to fully leave it in God’s hands and put our faith in Him. We felt the need to focus on our family of four and put all of our energy into our two miracles and move forward- away from the fertility medications, shots, pills, doctor appointments, and tests. For three years we had been living our life around all of those things, and we needed to take a break to feel free of them.

We will be the first to tell people how blessed we are to have two daughters. TWO!

Two more than many would dream of. We will never take them for granted or not realize how blessed we are. But it doesn’t take away the pain we feel not being able to have another, or to not have the control over deciding our family is complete.

I often feel like I need to justify our desire to have a third to others, but I’m learning that I don’t need to do that. We can be grateful for what we have, while still longing for what we don’t. But in doing so, we are learning to live our life and be happy.

And each day gets easier, with a few setback along the way. My heart will always long to be pregnant again- and we believe in miracles and hope we get one- but I’m learning to see how perfect our family is for us right now, too.

Over the past five years we have done 15 rounds of IUI, 2 rounds of IVF, I’ve had 2 minor surgeries to remove polyps from my uterus, we’ve spent thousands of dollars, I’ve had hundred of shots, pills, medications, appointments, breakdowns and tears.

But we’ve also gained great sympathy, compassion, love, understanding and acceptance. We’ve felt the lowest lows, but the most amazing highs- that can only be felt once you’ve hit bottom.

It’s my hope and desire to help spread awareness about infertility.

I am not an expert but I do have a lot of experiences under my belt. Because of this trial I have learned so much, but more importantly I have learned to have compassion for others. I have learned how to endure and have patience even when it is seems unbearable.

And I am continuing to learn how infertility can be a blessing in my life.

As I have endured this trial over the past 10 years my passion for spreading awareness has increased.

Writing is therapeutic for me and it is a way for me to share my feelings. But often, as I write, I feel inspired by what I type and looking back the words I share are almost always something I am needing to be reminded of myself. I know I am not on this journey alone and my faith in a loving Heavenly Father helps me through it all- including when I share my message.

At Infertili.tees it is our hope to spread awareness through written word and apparel. Wearing your heart on your sleeve so to speak, is just one way to show others what you are going through is important.

I hope that here you will feel safe, empowered and informed in all things infertility, family and faith. Please look for our shop coming soon with graphic tees and prints that will help spread infertility awareness. 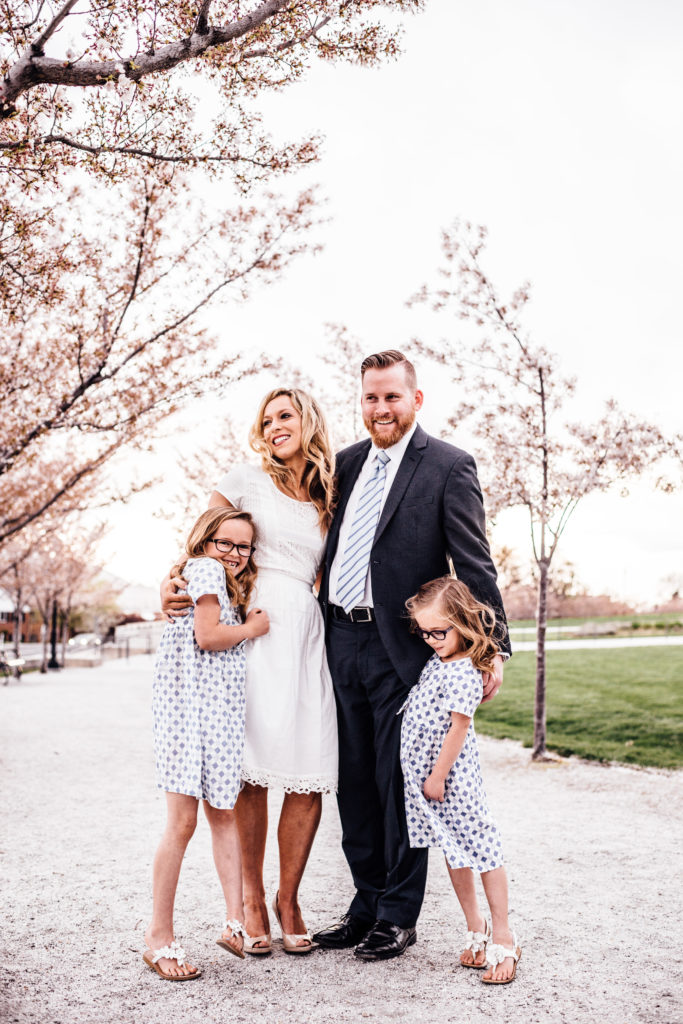 Next Post: Why Changing Plans Doesn’t Mean Giving Up »